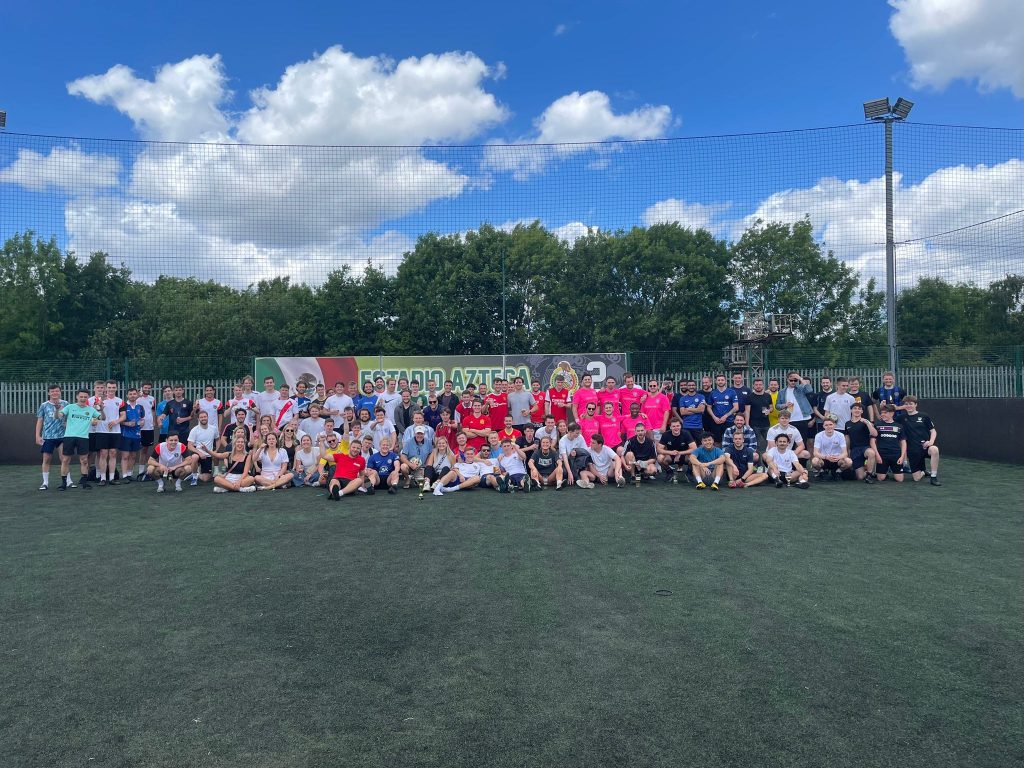 Charity Football Tournament – On what was a sweltering day in south London, 150 people assembled at Goals Wimbledon for the inaugural charity five-a-side tournament for the John King Brain Tumour Foundation.

With a couple of teams late and clearly nursing hangovers from Friday night, the tournament came into its own shortly after 10 am as forty people flooded four adjoining pitches to get the group stages underway.

Group B kicked off without any problems as ‘The Raboners’ – led by their brilliant skipper Alex Pickard and lethal frontman Billy Harris – steamrolled their way to the semi-finals with five straight wins in their group on the famed La Bombonera pitch.

Tournament co-organizer Max Arthur couldn’t hide his disappointment when tallying up his scores at the end of the play, with Group C’s ‘Rocco’s Rovers’ – the youngest side of all 18 teams – sneaking their way into the final four ahead of his side on goals scored.

Group A also kicked off in style and from the moment the ball was kicked, ‘Four Gunners, Two Stunners’ made the Olympiastadion their own.

The free-scoring Christian Frost put absolutely everything away, while Caspar Barnes’s tireless efforts in defence and Danny Sanger’s superb reflex saves saw them win all five of their group games.

In Group C, SW Vets replicated the feats of 4G, 2S and The Raboners with a spotless 100 % record, with Cam Leslie lighting up the Stade De France with some stellar displays.

The semi-finals were drawn and in game 1 it was the youthful Rocco’s Rovers vs Four Gunners, Two Stunners.

And what a match it was.

The boys in red raced to a 2-0 lead, but the youngsters came back late on with two quickfire goals to send it to a penalty shootout.

Sanger, injured from his earlier exploits in the day, was the hero for 4G, 2S as he saved two penalties to send his side to the final.

In the semi-final, some beautiful football was on show but ultimately it was heartbreak for The Raboners as SW Vets clawed their way into the final with a narrow 2-1 victory. It was a spirited showing from Pickard’s men, who took small consolation in the fact that Billy scooped the Golden Boot with a staggering 19 goals in six matches.

The atmosphere for the final was building with the parameter of the Estadio Azteca littered with a huge bustling crowd.

Understandably, both sides were running out of steam having played six matches beforehand on one of the hottest days of the year, but that took nothing away from the quality on show at the showpiece event.

Ultimately, 4G, 2S, came out on top to be crowned champions with a narrow 2-0 victory.

It was a deserved win for the boys in red, with Christian Frost named the Player of the Tournament after seven brilliant matches and a trip to Craven Cottage next season won for their efforts, as well as a crate of beer.

Nevertheless, you can take nothing away from SW Vets who were superb throughout and worthy of their silver medals and trip to the Oval.

It’s safe to say the tournament didn’t disappoint and match-goers are already excited for the next one in 2023.

Huge thanks to Gerri and her team at Goals Wimbledon for their help in the build-up and on the day. We had 18 teams and over 100 players and supporters basking in the sunshine on Saturday.