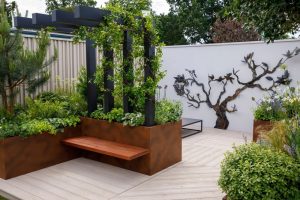 We were thrilled that the John King Brain Tumour Foundation Garden designed by Rhiannon Williams was not only awarded a SILVER AWARD but also won PEOPLE’S CHOICE BEST SHOW GARDEN.

This hospital rooftop garden provides a vital space for patients and hospital staff to be immersed in nature. It demonstrates how the charity is transforming under-used areas of grey concrete rooftops into hidden sanctuaries.

From scented flowers to a secluded seating area… 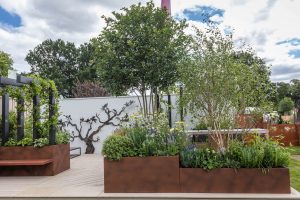 At this year’s RHS Hampton Court Palace Garden Festival many of the gardens were focused on ways to boost our mental and physical health while we’re outdoors.

Themes of grief, loss, loneliness and illness were explored in several Show Gardens, highlighting how they help with recovery and healing.

Gardens exploring dementia and isolation showed how we can connect with other people and find peace in green space. While the rooftop design for the John King Brain Tumour Foundation Garden by Rhi Williams is one example of how having a natural outdoor space within a medical setting can help with the physical recovery of patients and the mental well-being of staff. 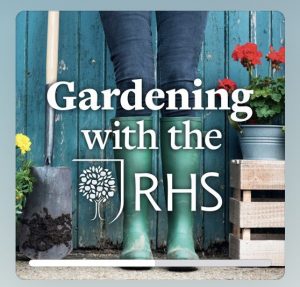 We were thrilled to have taken part in the RHS podcast for the week of the Hampton Court Flower Festival.

Each week they talk to the RHS experts, along with garden designers, scientists, growers, and the movers and shakers of the horticultural world

Holly King talks us through the principles of the wellness garden, the planting and the story behind the John King Brain Tumour Foundation.

Do have a listen, Holly starts talking just after an 8-minute introduction. 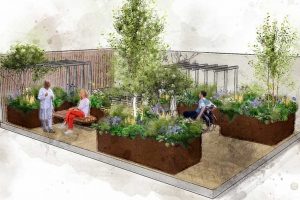 The John King Brain Tumour Foundation Garden is a hospital rooftop garden that provides a vital space for patients and hospital staff to be immersed in nature. It is a calming environment designed to aid recovery and provide a safe space for often difficult conversations. This small garden demonstrates how the charity is transforming under-used areas of grey concrete rooftops into hidden sanctuaries for people and wildlife to discover and enjoy.

At the heart of the garden, a sculpture by Emma Rodgers, inspired by a mighty English oak, symbolises strength, wisdom, and healing. Its leaf canopy is made from hands applauding the NHS. Under a canopy of dappled shade, there is a selection of spaces to sit, pause, reflect, and heal. Surrounding raised planters are filled with scented and textural plants in a blue and pale-yellow colour scheme as a tribute to the NHS.

Behind the build at Hampton Court – HortWeek 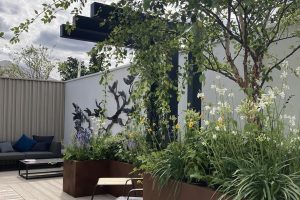 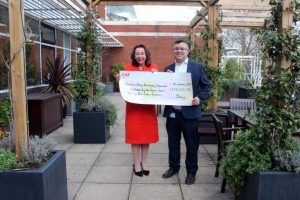 Tuesday, 19 February saw the presentation of a £133,000 cheque to our Neurosurgery department on behalf of the John King Brain Tumour Foundation.

John King sadly died following treatment for glioblastoma, a type of brain tumour, at St George’s Hospital in 2016. His wife Laura King set up the foundation in his name to raise money to buy a state-of-the-art Zeiss Opmi Pentero microscope, which is used during surgical treatment for the tumour.

Laura King presented the cheque to Mr Tim Jones, Consultant Neurosurgeon and Neuro-Oncology Lead Clinician, who treated John when he was a patient with us. 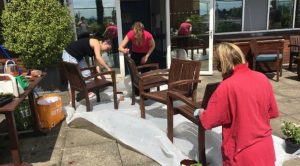 The John King Brain Tumour Foundation is initially funding a garden and state-of-the-art operating equipment for the hospital.

King was diagnosed with a glioblastoma brain tumour in 2015, a condition from which he passed away on 22 November 2016, aged 65.

His 40-year career in the kitchen included spells in London at the Dorchester, the Connaught, Le Caprice and Les Ambassadeurs, before moving to the Mandarin Oriental Manila in the Philippines. Most recently he had taken up a post as a part-time lecturer at Westminster Kingsway College, where he started his career, as well as working as chief caviar packer at King’s Fine Food alongside his wife Laura, owner of the fine food specialist supplier.